Mike can open every tight jar lid I throw his way. He does pull ups like a Navy Seal. And his sweat smells like pine needles.

But the man cannot grow a beard to save his life. Blame it on his viking roots or his white collar job or his brother whose face seems to have hogged all the hair. But the bottom line is that he really only has like seven hair follicles on his face. And that’s being generous.So when his friends at work convinced him to participate in Movember, a national fundraiser where men grow mustaches to raise money for prostate cancer and other mens health issues, I sort of laughed in his soft little hairless face. The only time I had seen even the suggestion (and I’m talking a whisper) of a mustache on him was when he returned from from a 14 day trek up Mount Kilimanjaro.

To his credit though, he’s really pulled out all the stops this month. Here are the top five proof points he gave our friends and family as evidence they should sponsor his ‘stache.

It’s hard to argue with this campaign platform. In fact, it was so convincing that my sister Michelle’s boyfriend, Gabor, grew a mustache in support of Mike’s. That’s some solidarity. 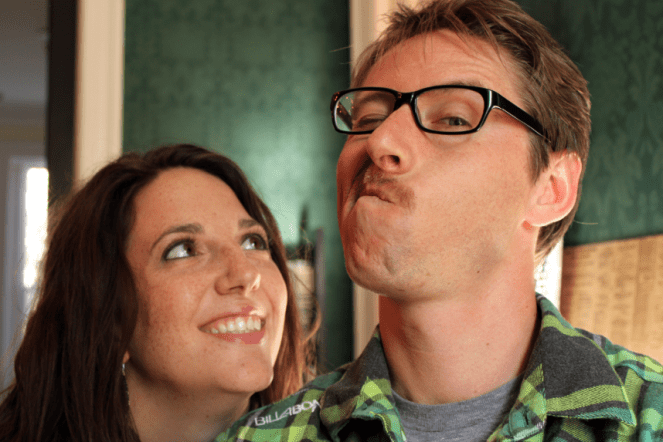 And apparently everyone at his office was was persuaded too, because his ‘stache was voted second best in the company in a mustache popularity contest. He also pulled together an impressive $417 of donations. That’s about $75 a follicle. Not bad.

And now after 30 days of diligent growing, if he sits in just the right light and tilts his chin just the right way, I can make out the subtle shadow of what, by next November, threatens to be a full blown mustache.

If you’d like to make a last minute donation to this awesome cause or just read the demeaning things Mike’s friends have written about his hair growing ability, go here.

Thank you for sharing my patterns and tutorials. When you do, it helps support the blog and my ability to create more free patterns. Which, by the way, I seriously love to do. So really, I mean it, thank you.
You may make items to sell with this pattern/tutorial. In exchange, I ask that you link back to this post page. Do not use my photos as your own sales photos. Do not distribute my patterns/templates as your own. Permission is NOT granted for mass production or factory manufacturing of any kind.

About Make & Do Crew→

Any content on this website is created for inspiration purposes only. Creating with my suggested methods, products used and tools is under your own risk. Crochet hooks and knitting needles are sharp--let's be careful people! Read my complete disclosure at: http://makeanddocrew.com/privacy-policy-disclosures/